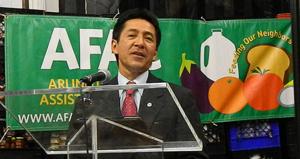 Arlington County Board member Walter Tejada occupies one of two seats up for election in 2015.

Have a hankering to be elected to the County Board in 2015? Here’s the simple formula: Find 18,000 people to vote for you, and the prize likely will be yours.

While the number of Arlington voters casting ballots in presidential, congressional and gubernatorial years followed a path upward in recent years, mirroring population growth, turnout for the so-called “constitutional” year of the cycle has remained anemic, with only slightly more people voting today than did in the early 1970s.

Turnout is expected to be little more than 35,000 next year, half the number of people who were anticipated to have voted in 2014 and less than a third of those casting ballots across Arlington in the 2012 presidential race.

The reason? A lack of a high-profile race, even though the offices on the ballot will have far more impact on the daily lives of residents than presidential, congressional or gubernatorial races do.

The marquee campaign of 2015 in Arlington – if there is one – is likely to be the battle for County Board, where two seats (currently occupied by Democrats Walter Tejada and Mary Hynes) will be on the ballot. Those races will be joined by campaigns for School Board, state legislature and the five Arlington constitutional offices (treasurer, clerk of Circuit Court, commissioner of revenue, commonwealth’s attorney and sheriff).

Only once every four years – barring special elections – do two County Board seats appear on the ballot together. All candidates run together, with the top two finishers garnering terms.

In 2015, Democrats assuredly will run two candidates, although Tejada and Hynes have not officially announced their plans for re-election and, if they do seek new terms, could face primary challenges.

Because there are two seats on the ballot, strategy comes into play: Should those opposed to Democrats run one candidate, or two?

The prevailing theory: A single, strong, well-financed opposition candidate running against two Democrats has a chance of getting voters to split their tickets and cause the loss of one of the Democrats, even though such a strategy ensures the victory of at least one Democrat.

In the 2007 race, voters had no clear anti-Democratic choice, spreading their votes among McMenamim, Warren and Ruebner and ensuring Tejada and Hynes won victories.

By contrast, the 2011 race featured only one candidate – Clement – but she was little-known, underfunded and did not have the backing of a major party’s get-out-the-vote apparatus.

This entry was posted in Campaign for Arlington County Board, 2007, In the News. Bookmark the permalink.