The Trump administration’s often delayed and much hyped “deal of the century” to broker Israeli-Palestinian peace may never see the light of day thanks to the chaos into which Israeli politics has been plunged following Prime Minister Benjamin Netanyahu’s inability to form a governing coalition and the subsequent decision by the Knesset to dissolve itself and hold new elections in the fall.

No serious analyst gave the plan a snowball’s chance even in the absence of concrete details about its content. As presidential adviser Jared Kushner made clear in remarks last month to the pro-Israel think tank Washington Institute for Near East Policy, the plan revolves around contenting Palestinians with economic betterment while denying them their political rights under perpetual Israeli domination.

Kushner’s recent interview with Axios, during which he averred that Palestinian freedom from Israeli military occupation would be a “high bar” to achieve, reinforced the wholly untenable nature of whatever the Trump administration is cooking up. Even Secretary of State Mike Pompeo conceded that others may legitimately perceive the plan to be “unexecutable” and “a deal that only the Israelis could love.” 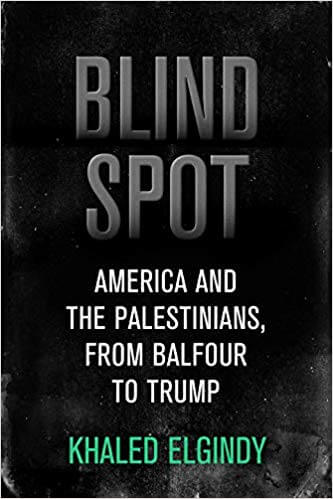 Against this backdrop, Khaled Elgindy’s conclusion in his important new book Blind Spot: America and the Palestinians from Balfour to Trump (Brookings Institution Press, 2019) that “the Trump era signaled a notable shift in US policy from ambivalence toward Palestinian leaders and Palestinian statehood to total indifference” (p. 246) seems a measured understatement.

And while the Trump administration may differ from its predecessors in its bombast and flair for the dramatic policy announcements, as Elgindy persuasively demonstrates, “Trump’s radical policy reversals on Jerusalem and refugees,” by moving the US embassy to the contested city and cutting US funding to UNRWA, “were not so much a ‘new approach’ to resolving the conflict, as his administration has claimed, as they were the culmination of the old approach.” (p. 249)

“Long before Trump arrived in the White House, George W. Bush, Bill Clinton, and other presidents going back to Lyndon Johnson had already been working to sideline the issue of Palestinian refugee rights” and were guilty of “steadily chipping away at UN Security Council Resolution 242 and the ‘land-for-peace’ formula by lending tacit approval to Israeli settlement construction,” (p. 250) Elgindy notes.

As US policy toward the Israeli-Palestinian issue reaches its logical apotheosis under the Trump administration, Elgindy’s book hit the shelves at an opportune moment to remind, or instruct, readers that US concern for the rights, aspirations, and dignity of the Palestinian people has always been an afterthought, if thought of at all, in its policy formulation.

Reading Blind Spot, one is struck by the coherence of US policy toward the Palestinian people over the past century even as political realities have continued to dramatically change. Indeed, there is nothing new under the sun.

For example, the Trump administration’s attempt to placate the Palestinian people with economic development in lieu of their political rights has many antecedents in US policy, as Elgindy documents. In 1953, the Eisenhower administration launched the Johnston Plan to employ and resettle 300,000 Palestinians in the Jordan Valley, a move through which the State Department hoped “the back of the Palestine refugee problem will have been broken.” Elgindy notes the “striking resemblance” of this initiative to Zionist “transfer” plans premised on the notion “that given the promise of land, jobs, and other economic benefits, Palestinian refugees would agree to be resettled in neighboring Arab states.” (p. 60)

This Orientalist policy approach, rooted in the racist idea that the venal Palestinians could be induced to sell their birthright for a mess of pottage, echoes throughout the decades of US policymaking to this day. In the 1980’s Secretary of State George Schultz “proposed focusing on improving the ‘quality of life’ of Palestinians” under Israeli military occupation “in place of a political settlement”. (p. 115)

And the George W. Bush administration touted Fayyadism—the peculiar mixture of state building, good governance, and economic development under Israeli military occupation named after Palestinian Authority Prime Minister Salam Fayyad—as a way to meddle in internal Palestinian politics by “promot[ing] stability and prosperity in the West Bank” and “prompt[ing] Palestinians” in the Gaza Strip “to rise up against Hamas” due to “a simultaneous decline in economic and political conditions” there. (p. 191)

Elgindy’s critique of US biases in its attempts to mediate the Israeli-Palestinian “peace process” will be familiar to those already having read Naseer Aruri’s Dishonest Broker or Rashid Khalidi’s Brokers of Deceit.

Elgindy provides value added by unearthing long-buried gold nuggets of solid advice to US policymakers that unfortunately went unheeded, such as when the House Foreign Affairs Committee invited Palestinian-American surgeon and Jaffa native Fuad Shatara to testify about the Balfour Declaration in 1922. “This is our national home, the national home of the Palestinians,” Shatara told the committee, “and I think those people are entitled to priority as the national home of the Palestinians and not aliens who have come in and have gradually become a majority.” (p. 18) Congress went on to pass overwhelmingly a resolution supporting a Jewish “national home” in Palestine nonetheless, an early manifestation of the unwillingness of the United States to factor Palestinian perspectives into its policy.

Blind Spot also makes an important contribution to the literature through original interviews Elgindy conducts. For example, Fayyad’s frank admission that “there’s nothing bilateral about our relationship with the United States,” summarizes the futility of the US-backed “peace process.” “We are incidental really. It was because of their interest in Israel. We sort of got in the way, and so they had to deal with us,” (p. 254) Fayyad concluded, in what serves an encapsulation of US relations with the Palestinian people over the past century.

Elgindy is the perfect combination of vested insider and detached scholar to write this story. He served on the negotiating team for the PLO during the 2007-2008 Annapolis negotiations, gaining a behind-the-scenes perspective into the unbalanced power dynamics that doomed the talks. And he wrote the book from the unlikely perch of fellow at the otherwise staunchly pro-Israel Center for Middle East Policy at Brookings, a lone, critical dissenting voice against “peace process” orthodoxies.

Blind Spot contains a few historical inaccuracies, such as referring to King Hussein of Jordan as the son, rather than grandson, of King Abdullah (p. 81) and discounting the number of Members of Congress who supported Rep. Betty McCollum’s (D-MN) groundbreaking legislation in support of Palestinian children’s rights in the previous Congress (p. 257). However, such minor errata do not detract from the readability of the book and the cogent, persuasive, and well-documented argument Elgindy makes that the United States has always and continues to suffer from a blind spot in its policymaking by denying the agency and rights of the Palestinian people.

This entry was posted in In the News, Progress Up Consulting, Writings. Bookmark the permalink.