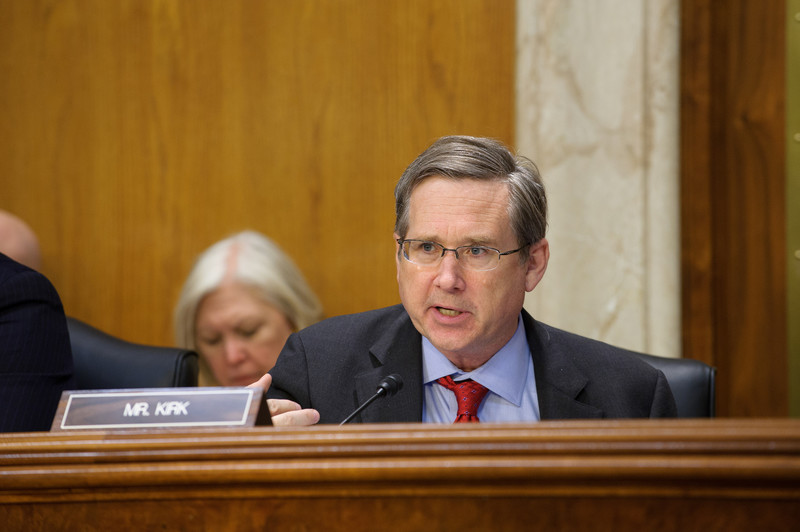 Senator Mark Kirk, Republican of Illinois, is leading efforts to legislate against BDS in the US Congress. (Senate Appropriations Committee)

Earlier this week, Senators Mark Kirk (R-IL) and Joe Manchin (D-WV) and Representatives Robert Dold (R-IL) and Juan Vargas (D-CA) introduced the “Combating BDS Act of 2016” (S.2531 and H.R.4514), bills which seek to authorize state and local governments to divest assets from and prohibit investment in any entity that “engages in a commerce or investment-related boycott, divestment or sanctions activity targeting Israel.”

Illinois signed into law a bill last year requiring the state to divest from foreign companies that support boycott, divestment or sanctions (BDS).

State legislatures in Arizona, California, Florida, Indiana and New York are currently considering similar legislation targeting any US-based or foreign entity that boycotts or divests over concerns about Israel’s human rights record. (Other states are also considering legislation to ban contractors from doing business with the state if they support BDS, another form of anti-BDS legislation not covered by the Combating BDS Act.)

Clearly US states — acting under the impetus of the Israeli government, which has branded the BDS movement a strategic threat and is throwing massive amounts of money into an effort to quash the BDS movement — are not waiting for a congressional green light before taking action.

So is the Combating BDS Act mere grandstanding, a symbolic seal of congressional approval to state-level legislative initiatives already well underway? Not exactly — the bills in Congress have important legal ramifications.

First, they seek to proactively prevent the doctrine of preemption from being employed in the future to invalidate state-level anti-BDS laws. This doctrine holds that federal law takes precedence over state law when the two are in conflict. By passing the Combating BDS Act, Congress would align federal law with emerging state law to prevent this potential conflict from arising in the future.

Second, the bills attempt to immunize state and local governments from legal challenges by corporations which may be harmed by state divestment.

According to Senator Kirk’s press release, the legislation is designed to protect governments from potential lawsuits which allege that anti-BDS laws are “unreasonably burdening or discriminating against interstate or foreign commerce.”

Third, and perhaps most importantly, these bills would have the federal government “authorize” states and local governments to do something blatantly unconstitutional: penalize entities for engaging in First Amendment-protected political speech.

In a landmark 1982 decision in NAACP v. Clairborne Hardware, the US Supreme Court ruled that boycotts and related activities to bring about political, social and economic change are political speech, occupying “the highest rung of the hierarchy of First Amendment values.”

By seeking to “authorize” state and local government to penalize entities exercising their protected political speech with which the government does not agree, Congress would be encouraging government to engage in “viewpoint discrimination,” an impermissible violation of the First Amendment – the protected right to free speech – according to the Supreme Court.

Congress cannot “authorize” state and local governments to shred the First Amendment just as it cannot empower them to violate any other constitutional right.

To push back against this latest legislative assault on BDS, the US Campaign to End the Israeli Occupation issued an action alert opposing the Combating BDS Act, which generated more than 9,000 constituent letters to Congress in its first 24 hours.

The goal is to send a clear message to Congress that it cannot authorize state and local governments to penalize entities for engaging in political speech in order to protect Israel’s oppression of Palestinians.

Meanwhile, the powerful Israel lobby group AIPAC has positively cited the proposed legislation as part of its agenda to “Fight the Boycott of Israel.”

It is too early to determine if the Combating BDS Act will generate enough support on Capitol Hill to pass. Even if it does, however, nothing in this bill or any other anti-BDS legislation can impinge upon the constitutionally protected right of Americans to engage in and advocate for BDS campaigns.

Rahul Saksena of Palestine Legal stated in Salon: “The best way to fight these bills is to organize more BDS campaigns and use these bills as an opportunity to raise public support for Palestinian freedom.”

Make no mistake about it. These frantic attempts by Israel’s supporters to squelch the BDS movement through heavy-handed, unconstitutional, McCarthyite legislation are a sign of their desperation, not strength.

BDS has become mainstream in the United States as evidenced by more than 100 victories in churches, labor unions, academic organizations and student governments.

Israel and its supporters can’t defeat the struggle for Palestinian freedom, justice and equality on its merits so they are resorting to what they do best: engaging in top-down attempts to try to silence those who oppose Israel’s apartheid rule.

This entry was posted in In the News, US Campaign for Palestinian Rights, Writings. Bookmark the permalink.