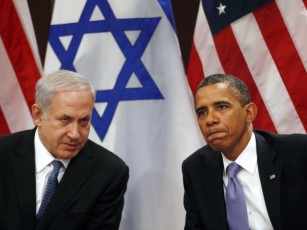 Israeli Prime Minister Benjamin Netanyahu is in town again and he’s here to ask President Obama for more money and weapons. Though Israel already receives more of America’s foreign aid budget than any other nation, Netanyahu is requesting an increase in aid from 3 billion dollars to 5 billion per year for the next 10 years.  Then, an Antarctic ice shelf that could collapse, a new study from the Potsdam Institute reveals. We’ll find out when from client scientist Johannes Feldmann – and what will come next.

Josh Ruebner, Policy Director of the US Campaign to End the Israeli Occupation and author of  Shattered Hopes: Obama’s Failure to Broker Israeli-Palestinian Peace
Johannes Feldmann, climate scientist at the Potsdam Institute for Climate Impact Research in Germany

This entry was posted in Audio/Video, US Campaign for Palestinian Rights. Bookmark the permalink.