Janine Jackson interviewed Josh Ruebner about BDS bans for the February 1, 2019, episode of CounterSpin. This is a lightly edited transcript.

Janine Jackson: The New York Times doesn’t say exactly what’s in the provision Senate Republicans added to legislation on Middle East security policy, only that it

aims to curtail support for the boycott,  divest and sanctions—or BDS—movement, which seeks to pressure Israel into ending the occupation of the West Bank.

The January 28 piece says a good deal, though, in its positive framing: “Senate Advances Pro-Israel Bill,” says the headline, and the lead describes rules “affirming the right” of local and state governments to break ties with companies that boycott or divest from Israel.

It is a Beltway story, about GOP efforts to seed divisions among Democrats, and tells readers that “Republicans are becoming more brash in their accusations”—accusations for which it proceeds to make space,  including that of a North Dakota senator who, we’re told, “mused on Twitter” that Democratic opposition to the anti-BDS measure “may be nothing more than a thinly veiled attempt to hide the rising antisemitism in their own party.”

The piece positions Marco Rubio, who pushed for the provision, as representing one side of the issue, citing his statement that the BDS movement “isn’t about freedom and equality. It’s about destroying Israel.” But the Times seems not to see how its own use of the terms “pro-Israel” and “anti-BDS” as synonyms rather suggests the same view—all of which encourages one to try looking at things under a different light.

We’re joined now by Josh Ruebner; he’s policy director at the US Campaign for Palestinian Rights and author of, most recently, Israel: Democracy or Apartheid State?, from Olive Branch Press. He joins us now by phone from Washington, DC. Welcome back to CounterSpin, Josh Ruebner.

Josh Ruebner: Thanks so much for having me.

JJ:  Like so much coverage, that New York Times piece really takes as its topic political maneuvering. And in that context, the comeback, if you will, to what the story calls Republican efforts to paint some Democrats “as extremist, and even antisemitic”— the comeback is to have a quote from Sen. Chris Murphy telling Rubio, “You know it isn’t true” that a significant number “of Senate Dems support BDS”—which, again, as text, tells us that not supporting BDS means not being antisemitic.

So it’s partly down to the political football approach, but the effect is the same: There is no positive explication or defense of the BDS movement to be found in a news account ostensibly about that movement.

So with that off my chest, we spoke with you two years ago July about an Israel Anti-Boycott Act.  Is this that again? What should we know about this Senate iteration?

JR: No, this is a different bill, that was also introduced in the previous Congress and the one before that, and it’s called the “Combating BDS Act.” And the reason why Marco Rubio has been unsuccessful for the past four years in trying to enact this bill into law is because it’s patently unconstitutional. It’s a bill that encourages states to penalize individuals for their political and moral and religious beliefs on boycotting for Palestinian rights, by denying those people governmental contracts.

And we’ve had two federal district judges already overturn these laws, in Kansas and Arizona, thanks to lawsuits brought by the ACLU, and there are three pending lawsuits challenging similar laws in Texas and Maryland as well. And the reason why Senator Rubio is attaching this very controversial bill to this broader bill is because he knows he can’t pass it as a standalone bill, because of its unconstitutionality. So he’s trying to hide it within a broader bill.

JJ: So who is this aimed at? Is it governments? Is it businesses? Who would be affected by this? 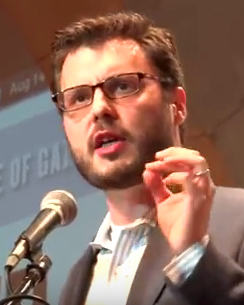 JR: This is a bill that attempts to encourage states to coerce individuals and companies to toe a particular line regarding Israel and the Palestinians, and to punish individuals and companies that support Palestinian rights through nonviolent efforts to engage in campaigns of boycott, divestment and sanctions. And it’s a patently unconstitutional call, because what it’s doing is it’s trying to leverage the power of government to punish people for having a certain political viewpoint.

And it should be noted that the Supreme Court of the United States has upheld that engaging in political boycotts, whether the government agrees with them or not, is a constitutionally protected right under the First Amendment.

JJ: It sounds as though, legislatively, this may have no legs, but it’s clearly about something more than that. I have to return to this troubling sentence, also from the New York Times:

With Britain’s Labour Party embracing anti-Israel policies, and other left-wing parties in Europe courting Muslim immigrant voters, Jews in the United States have eyed the toehold that Palestinian rights activists have secured in the Democratic Party with trepidation.

There’s a lot happening there. You could engage what strikes you, but what bums me out is the crude zero-sum presentation of Muslims against Jews against Palestinians. It seems like politics without people.

JR: Yeah, absolutely. I mean, it’s presumptuous of the New York Times to assume a certain political viewpoint because of someone’s religious affiliation. And I would go even further to say that that’s even bigoted, to consider that a particular group would hold a political ideology just based on their identity.

It’s very clear that the movement for Palestinian rights in the United States is comprised of people of all faiths, including people of the Jewish religion, who support boycott, divestment and sanctions to achieve Palestinian rights. So it’s not at all an accurate statement by the New York Times.

We now have elected members of Congress who not only defend our constitutional right to engage in boycotts for Palestinian rights, but in the case of some freshmen members of Congress, like Rep. Rashida Tlaib and Rep. Ilhan Omar, they actually support boycotts for Palestinian rights. And they’re introducing a whole new paradigm for thinking about this issue in the halls of Congress. And this is clearly worrying those who are protecting the status quo of Israeli military occupation, and separate and unequal policies toward the Palestinians. 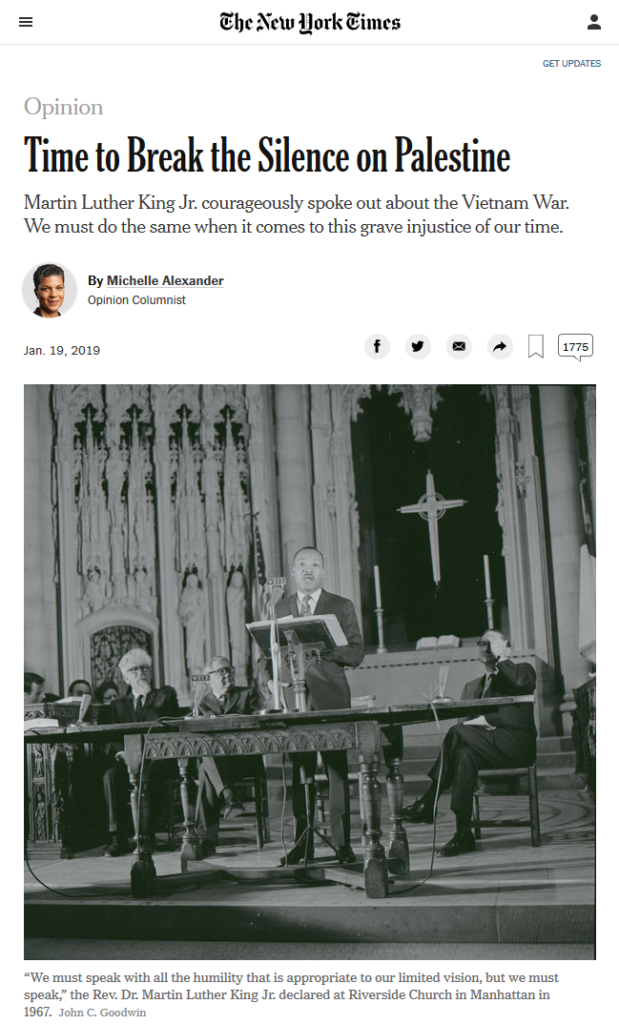 JJ: Yes, just to further that: Reporting does kind of suggest that we see these anti-BDS moves as responsive to the fact that, while there is still an ongoing acknowledgement that antisemitism, of course, itself is very real and indeed rising, that “there seems to be increased understanding that criticism of the policies and practices of the Israeli government is not in itself antisemitic”—those last being the words of New York Times columnist Michelle Alexander, in her recent piece, “Time to Break the Silence on Palestine.”

Having worked around these concerns for years now, do you feel something changing, not only in Congress but just culturally, if you would, around these issues?

JR: Yeah. Absolutely. I think there’s never been a more yawning divide between the parties on this issue, with the Republican Party and its members portraying itself as the party of Israel.

And it makes a lot of sense when you think about it, because the policies that are being enacted by the government of Israel mirror the exact ethno-nationalism white supremacy that the Republican Party is pushing out. And that is clearly the ideology and policy of the Trump administration. Whereas the Democratic Party, which is becoming more diverse, more responsive to social justice concerns and campaigns, is naturally gravitating toward Palestinian rights as part and parcel of a broader progressive agenda.

So there are huge changes underfoot. I think we’re going to see this play out, not only in the current Congress, but especially in the upcoming presidential campaign for 2020, where the issue of Israel and the Palestinians dividing Democrats from Republicans has already become a theme in the media.

JJ: I guess, finally, I have some concern that the way that corporate media tend to map issues onto Beltway politics can sometimes muddy an issue rather than clarifying it, by not separating the ideas from their vessels, if you will.

And if BDS is simply tracked onto new Democrats in Congress, that will not necessarily increase one’s understanding of the role that it’s playing on university campuses and on political organizations outside of two-party politics, and that broader conversation about Israel/Palestine. So I wonder what journalism you think would be helpful in this regard, in terms of not just tracking legislation, but tracking the issues themselves.

JR: Yeah, lost in all of this discussion oftentimes is how the movement for Palestinian rights gets reduced to this acronym of BDS: boycott, divestment and sanctions.

So to get caught up in the acronym, and especially the Republican demonization of BDS as a set of tactics to advance Palestinian rights, is really to prevent people from having this broader understanding of just how widespread this movement has become.

You’ve had dozens of college campuses pass resolutions calling for Palestinian rights, you’ve had more than 10 mainstream church denominations, representing tens of millions of Americans, calling for boycotting Israeli settlement products, divesting their assets from companies that are complicit in Israel’s human rights abuses, and calling for an end to US weapons transfers to Israel, which are, of course, given at taxpayer expense.

JJ: We’ve been speaking with Josh Ruebner, policy director at the US Campaign for Palestinian Rights; they’re online at uscpr.org. His book Israel: Democracy or Apartheid State? is out now from Olive Branch Press. Thank you, Josh Ruebner, for joining us this week on CounterSpin.

JR: Thanks so much for having me.

This entry was posted in Audio/Video, In the News, US Campaign for Palestinian Rights. Bookmark the permalink.